George Nathaniel Curzon was one of the most talented, colourful and controversial of British statesmen. Viceroy of India under Queen Victoria and Foreign Secretary under George V, his career stretched from the high noon of Empire to the traumatized Britain of the 1920s. Brilliant, obsessive, tempestuous and – in the words of the notorious rhyme – superior, Curzon left his unmistakable mark on the era. His astonishing energy made him the most travelled minister who ever sat in a British Cabinet, the writer of immense volumes on Asia, the compulsive restorer of ancient buildings in Britain and India. His character inspired both adoration and dislike, his work both admiration and disparagement. In his lifetime he was often seen as arrogant and pompous; after his death his reputation was savaged unscrupulously by Beaverbrook and others. In this book, the first full biography since the official Life was published in the 1920s, David Gilmour investigates the anecdotes and accusations that have turned this magnetic and contradictory figure into something of a caricature.
Five years of research into more than seventy archival collections, including the 1,400 files and boxes of the Curzon Papers, have enabled him to produce a rounded, credible and above all human portrait of a man of many sides and interests. Emphasis is placed particularly on the importance of his personal relationships, the long vendettas, the turbulent friendships and the passionate love affairs which complicated and enriched his life. And in the background of the portrait contemporary figures such as Balfour, Kitchener and Morley emerge in a new and sometimes doubtful light. The book has won the Duff Cooper Prize.

Be the first to review “Curzon” Cancel reply 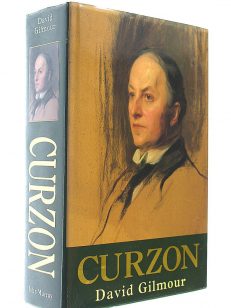