Counterfeiter : How a Norwegian Jew Survived the Holocaust

Published for the first time in English, this is an enthralling personal account of the secret Nazi project, Operation Bernhard, devised to destabilize the British and, later, American economies by creating and putting into circulation millions of counterfeit banknotes. A team of typographers and printers was pulled out of the rows of prisoners on their way to the gas chambers and transferred to the strictly isolated Block 19 in Sachsenhausen concentration camp. There they were presented with the enormous task of producing almost perfect counterfeits to the value of hundreds of millions of pounds sterling. These notes were to be dropped from bombers over London, with the aim of causing financial chaos. When the time came the Luftwaffe’s resources were fully committed in other campaigns and theaters but some of the currency was successfully used to fund operations in Germany’s secret war.

Moritz Nachtstern (1902-1969), was a Norwegian-Jewish typographer deported from Oslo in 1942. This is his story, as told to his wife and written down by her, then edited by journalist Ragnar Arntzen. It was originally published in Norwegian in 1949. It covers the three terrible years from his arrest and transportation to Germany, through the horrors of life in Auschwitz and Sachsenhausen to his escape in the last chaotic and terrifying days as the liberating American forces approached. At the center of this personal tale of courage and endurance is Nachtstern’s absorbing description of how, in order to survive, he participated in the creation of exquisite forgeries, while working as slowly as possible, both to frustrate the Nazi plan and to ensure that he and his fellow forgers never became expendable.

Nachtstern’s daughter Sidsel contributes a moving foreword, “It cannot be erased,” and essays by Lawrence Malkin and Bjarte Bruland place this sixty-year old document in its historical context.

The translator, Margrit Rosenberg Stenge, was born in Germany but spent five years of her childhood in hiding with her parents in Norway and Sweden during World War II. She has lived in Montreal since 1951 and has translated and published a number of Holocaust memoirs.

Be the first to review “Counterfeiter : How a Norwegian Jew Survived the Holocaust” Cancel reply 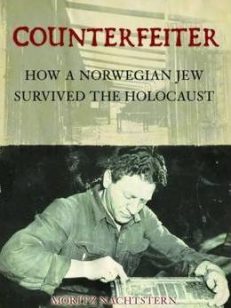 You're viewing: Counterfeiter : How a Norwegian Jew Survived the Holocaust €7.00
Add to cart
Create a new list