G.W. Bowersock, The New York Review of Books “There is scarcely anything on which he does not offer an original apercu, sometimes illuminating, sometimes simply provocative, but always worth reading…Jenkyns’s view of ancient literature is Olympian.” The writings of the Greeks and Romans form the bedrock of Western culture. Inventing the molds for histories, tragedies, and philosophies, while pioneering radical new forms of epic and poetry, the Greeks and Romans created the literary world we still inhabit today. Writing with verve and insight, distinguished classicist Richard Jenkyns explores a thousand years of classical civilization, carrying readers from the depths of the Greek dark ages through the glittering heights of Rome’s empire. Jenkyns begins with Homer and the birth of epic poetry before exploring the hypnotic poetry of Pindar, Sappho, and others from the Greek dark ages. Later, in Athens’s classical age, Jenkyns shows the radical nature of Sophocles’s choice to portray Ajax as a psychologically wounded warrior, how Aeschylus developed tragedy, and how Herodotus, in “inventing history,” brought to narrative an epic and tragic quality.
We meet the strikingly modern figure of Virgil, struggling to mirror epic art in an age of empire, and experience the love poems of Catullus, who imbued verse with obsessive passion as never before. Even St. Paul and other early Christian writers are artfully grounded here in their classical literary context. A dynamic and comprehensive introduction to Greek and Roman literature, Jenkyns’s Classical Literature is essential reading for anyone seeking a deeper understanding of the classics–and the extraordinary origins of Western culture. Library Journal, STARRED review “[R]ich, witty, perceptive, and brief…One of the best introductions available to the general reader.” Christopher B. Krebs (author of A Most Dangerous Book), The Wall Street Journal “[A]ccessible and enjoyable…few scholars are better positioned to embark on such a journey than Mr. Jenkyns.

Be the first to review “Classical Literature” Cancel reply 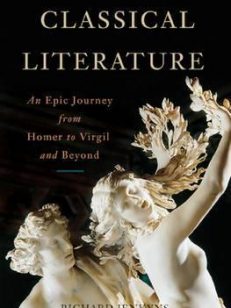