For every victory carved from adversity by a professional golfer, there is a moment when a player’s over-confidence or self-doubt leaves spectators gawking in disbelief. Players in the great panoply of golfing clangers” include the feisty Babe Zaharias, who was damned if she was giving second best to a (male) amateur champion, and Nigel Denham, who, in the 1974 English Amateur Championship, insisted on playing his approach shot to the 18th from the member’s bar. There was Scotland’s Bobby Cruickshank knocking himself out just in sight of victory at the 1934 US Open, and Thomas Bjorn refusing to leave the sand at Royal St. George’s in 2003. Henry Cotton, Tom Weiskopf, Nick Faldo, the Great White Shark, and Phil Mickelson are just some of the many favorites who contributed to at least one of these toe-curling moments.

Be the first to review “Classic Golf Clangers” Cancel reply 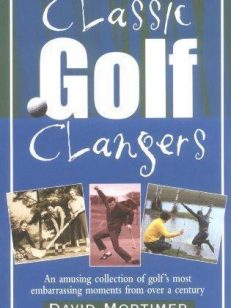