Charles Manson Now is a critical dissection of what happened forty-one years ago when Manson family members stormed the Polanski estate near Los Angeles and murdered five people, including one of America’s most beautiful, beloved actresses, Sharon Tate.This book is also a collage of Charles Manson’s own writing, a poetic, ironic, and disturbing account of his universe, from his childhood to his time in the 8×12 prison cell where he is condemned to stay forever. It is Charles Manson, uncensored, unedited, in his own words.When author Marlin Marynick was eight years old, he discovered a beat up copy of Helter Skelter – the bestselling true crime book of all time written by Vincent Bugliosi, the lead prosecutor at Charles Manson’s trial. Bugliosi’s portrait of Charles Manson as an icon of unbridled evil haunted Marynick for years, well into his career as a psychiatric nurse and ultimately culminated when he met Manson behind the tightly locked doors of California’s Corcoran State Prison. In Charles Manson Now, Marynick challenges the official version of events.

Be the first to review “Charles Manson Now” Cancel reply 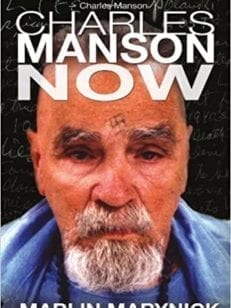