Candle in the Wind

Candle in the Wind was written in 1960 while Solzhenitsyn was working as a teacher of mathematics and physics. It reflects his professional background as a mathematician and his interests in science and technology. Moreover, Candle in the Wind provides an exceptionally comprehensive statement of his philosophy. Much in the play is autobiographical, and there is a distinct resemblance between the hero Alex and Solzhenitsyn himself.

The play deals with a fundamental moral question — whether science should use its techniques to manipulate or change human personality. The central figures are Alex, a scientist who has been released after internment in a prison camp, and a young woman — the candle in the wind. Her personality is transformed from fragility and sensitivity to coldness and resoluteness by means of biofeedback techniques employed to stabilize her nervous system. The ending is ambiguous but the work brings into focus Solzhenitsyn’s deep concern about the basic question which is the theme of the play.

Be the first to review “Candle in the Wind” Cancel reply 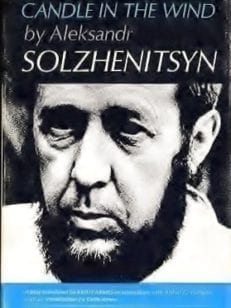 You're viewing: Candle in the Wind €9.00
Add to cart
Create a new list