By Myself and Then Some

Lauren Bacall was barely 20 when she made her Hollywood debut with Humphrey Bogart and became an overnight sex symbol. Their romance on and off screen made them Hollywood’s most celebrated couple and together they produced some of the most electric scenes in movie history. But when Bogart died of cancer in 1957, Bacall had to find a way of living beyond the fairytale and ironic way she had evolved. In a time of post war communism, Hollywood blacklisting and revolutionary politics she moved with the legends: Hemingway, the Oliviers, Katharine Hepburn, Bobby Kennedy, an engagement to Frank Sinatra and a second turbulent marriage to Jason Robards. Now at 80, BY MYSELF AND THEN SOME brings her story up to date including her recent films and Broadway runs, fond memories of her children and many close lifelong friendships, not least the greatest love of her life, Humphrey Bogart. 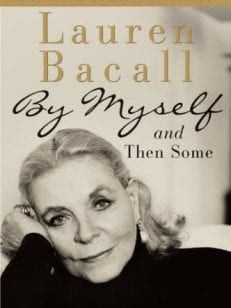 You're viewing: By Myself and Then Some €15.00
Add to cart
Create a new list