Burn Rate : How I Survived the Gold Rush Years on the Internet

For much of the 1990s, starting up a business on the Internet offered young go-getters with a taste for risk the fastest route to glittering prosperity. Our light-speed economy has made possible a new American dream, to take an idea overnight from the kitchen table to hundreds of millions of dollars in market value. But the desperate Internet entrepreneur knows every day, every night– that the chances of success and survival dwindle at the same rate as the cash evaporates. Make the right deals, announce the right products at the right time, and the investors will beat down your doors with money. Falter, and the venture capitalists will eat you alive. Michael Wolff was one of the first to see the potential of the Internet and one of the pioneers of new media. As he labored to build his own company, Wolff, a former journalist, knew he had stumbled on the seminal business story of the 1990s. “Burn Rate” is about the heart-in-your-throat struggles of being an entrepreneur. It is about witnessing an industry being born: the founding of Wired magazine, the launch of Time Warner’s much-touted Pathfinder, the conflict between content centered on the East Coast and technology on the West Coast, the rise of the search engines, the dominance and dysfunctionality of America Online, and the thud of Microsoft stumbling and falling down on the Net. In the precarious world of the Internet, where income is a rosy projection and profit little more than a hope and a prayer, a company is no better than the confidence it radiates to its potential partners. After the freewheeling early years of the World Wide Web, the financial prospects of fledgling Web businesses collectively dropped in one stunning month when Wired, the most famous Internet company, failed to launch its stock. Wolff found himself at the head of a rapidly expanding company with seven weeks of capital remaining, trapped between the insatiable needs of his business and the chilling machinations of his investors. With the clock ticking, his only hope was to strike a winning deal. With mordant wit, “Burn Rate” portrays life on the bleeding edge of capitalism– a realm where your savior, the venture capitalist, may also be your undoing. A Faustian figure, the venture capitalist reveals to Michael Wolff the secret workings of business, as well as the human dimensions of how companies are made, bought, and sold. But the price he asks in return is steep. He never risks too much of his own money but makes sure that he will profit best and first from the entrepreneur’s work. As Wolff builds his business, you’ll get to know the geeks, billionaires, weasels, and, of course, visionaries he meets along the way. Louis Rossetto, the unemployed expat who creates Wired. Walter Isaacson, the prince of Time Warner, who throws the resources of America’s largest media company behind the Web. The boy investor, the “dumb money” who backs Wolff’s company. Halsey Minor, the executive recruiter who founds a publishing empire on the Net. The CMP boys, the computer magazine publishers who are desperate to get into the Internet game. Robert Maxwell’s children, whose high-flying company is one of the first bubbles to burst on the Internet. Even Barry Biller, who advises Wolff that getting in on the ground floor is good only if you’re still standing in the end. Wolff discovers, much to his own consternation, that his work, inspiration, and imagination entitle him to no more than a minor share of his own company’s potential wealth. And, in the end, he may only be along for the ride.

Be the first to review “Burn Rate : How I Survived the Gold Rush Years on the Internet” Cancel reply 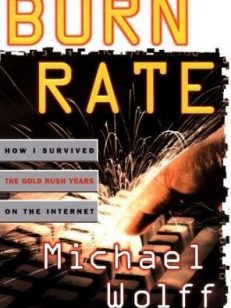 You're viewing: Burn Rate : How I Survived the Gold Rush Years on the Internet €15.00 Incl. VAT
Add to cart
Create a new list