Europe was in the throes of World War II, and when America joined the fighting, Ernie Pyle went along. Long before television beamed daily images of combat into our living rooms, Pyle’s on-the-spot reporting gave the American public a firsthand view of what war was like for the boys on the front. Pyle followed the soldiers into the trenches, battlefields, field hospitals, and beleaguered cities of Europe. What he witnessed he described with a clarity, sympathy, and grit that gave the public back home an immediate sense of the foot soldier’s experience. There were really two wars, John Steinbeck wrote in Time magazine: one of maps and logistics, campaigns, ballistics, divisions, and regiments and the other a “war of the homesick, weary, funny, violent, common men who wash their socks in their helmets, complain about the food, whistle at Arab girls, or any girls for that matter, and bring themselves through as dirty a business as the world has ever seen and do it with humor and dignity and courage—and that is Ernie Pyle’s war.” This collection of Pyle’s columns detailing the fighting in Europe in 1943–44 brings that war—and the living, and dying, moments of history—home to us once again. 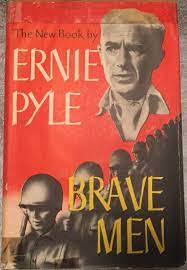