Who guards the world of covert operations? Enter the Cellar, a most secret spy organization hiding deep within the United States.

Two women become inextricably involved in a dangerous web of lies, intrigue, and betrayal as they fight for their lives and the safety of their country. Neeley is the lover and protégé of Gant, a Cellar operative, and is trying to both pick up the pieces of her life after Gant’s death and unveil a mystery that Gant always held close to his chest. Hannah, a housewife, is equally lost after her husband simply disappears. They soon learn that the men in their lives shared a dangerous secret, one some very powerful people would shed blood to protect. Neeley and Hannah’s chance meeting sets a decades-old plan into motion.

They couldn’t come from more different worlds, but as they try to escape the people who seem determined to kill them, Hannah and Neeley discover they have at least one thing in common: they’ve both been living a lie.

Crisscrossing the globe, the women find themselves in a deadly game of survival, one that they must win in order to keep the United States safe not only from vicious acts of terror, but from its own powers that be. And if they ever hope to uncover the truth about the lovers they thought they knew, Neeley and Hannah first must learn the truth about themselves. But when the Cellar is involved, there is no such thing as coincidence, and the truth is always protected by a Bodyguard of Lies.

Be the first to review “Bodyguard of Lies” Cancel reply 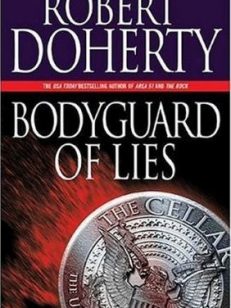