Blood on the Snow : The Killing of Olof Palme

The Swedish Prime Minister Olof Palme, a major figure in world politics and an ardent opponent of apartheid, was shot dead on the streets of Stockholm in February 1986. At the time of his death, Palme was deeply involved in Middle East diplomacy and was working under UN auspices to end the Iran-Iraq war. Across Scandinavia, Palme’s killing had an impact similar to that of the Kennedy assassinations in the United States-and it ignited nearly as many conspiracy theories. Interest in the Palme slaying was most recently stirred by reports of the death of Christer Pettersson, who was tried for the murder twice, convicted the first time, and then acquitted on appeal.

In his investigative account of Palme’s still-unsolved murder, the historian Jan Bondeson meticulously recreates the assassination and its aftermath. Like the best works of crime fiction, this book puts the victim and his death into social context. Bondeson’s work, however, is noteworthy for its dispassionate treatment of police incompetence: the police did not answer a witness’s phone call reporting the murder just 45 seconds after it occurred, and further time was lost as the police sought to confirm that someone had actually been shot. When the police arrived on the scene, they did not even recognize the victim as the Prime Minister. This early confusion was emblematic of the errors that were to follow.

Bondeson demolishes the various conspiracy theories that have been devised to make sense of the killing, before suggesting a convincing explanation of his own. A brilliant piece of investigative journalism, Blood on the Snow includes crime-scene photographs and reconstructions that have never before been published and offers a gripping narrative of a crime that shocked a continent.

Be the first to review “Blood on the Snow : The Killing of Olof Palme” Cancel reply 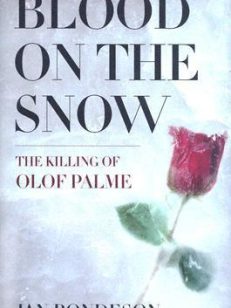 You're viewing: Blood on the Snow : The Killing of Olof Palme €24.00 Incl. VAT
Add to cart
Create a new list