Beyond the Tower : A History of East London

From Jewish clothing merchants to Bangladeshi curry houses, ancient docks to the 2012 Olympics, the area east of the City has always played a crucial role in London’s history. The East End, as it has been known, was the home to Shakespeare’s first theater and to the early stirrings of a mass labor movement; it has also traditionally been seen as a place of darkness and despair, where Jack the Ripper committed his gruesome murders, and cholera and poverty stalked the Victorian streets.

In this beautifully illustrated history of this iconic district, John Marriott draws on twenty-five years of research into the subject to present an authoritative and endlessly fascinating account. With the aid of copious maps, archive prints and photographs, and the words of East Londoners from seventeenth-century silk weavers to Cockneys during the Blitz, he explores the relationship between the East End and the rest of London, and challenges many of the myths that surround the area.

Be the first to review “Beyond the Tower : A History of East London” Cancel reply 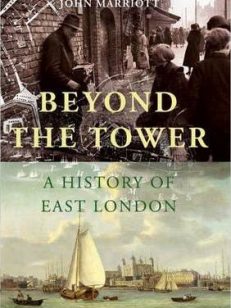 You're viewing: Beyond the Tower : A History of East London €12.00
Add to cart
Create a new list