Between Giants : The Battle for the Baltics in World War II

The Baltic States suffered more than almost any other territory during World War II, caught on the front-line of some of the war’s most vicious battles and squeezed between the vast military might of the German Wehrmacht and the Soviet Red Army. From an expert on the Eastern Front of World War II, this book chronicles the cataclysmic experience of the region that includes modern-day Lithuania, Estonia and Latvia. Combining new archival research and numerous first-hand accounts, this is a magisterial description of conquest and exploitation, of death and deportation and the fight for survival both by countries and individuals.

Be the first to review “Between Giants : The Battle for the Baltics in World War II” Cancel reply 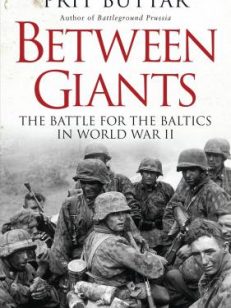 You're viewing: Between Giants : The Battle for the Baltics in World War II €17.00 Incl. VAT
Add to cart
Create a new list