The bomb, which killed an estimated 140,000 civilians in Hiroshima and destroyed the countryside for miles around, was one of the defining moments in world history. That mushroom cloud cast a terrifying shadow over the contemporary world and continues to do so today. But how could this have happened? What led to the creation of such a weapon of mass destruction?

From the moment scientists contemplated the destructive potential of splitting the atom, the role of science changed. Ethical and moral dilemmas faced all those who realized the implications of their research. Before the Fall-Out charts the chain of events from Marie Curie’s scientific breakthrough through the many colourful characters such as Einstein, Robert Oppenheimer and Lord Rutherford, whose discoveries contributed to the bomb.

The story of the atomic bomb spans 50 years of prolific scientific innovation, turbulent politics, foreign affairs and world-changing history. Through personal stories of exile, indecision and soul-searching, to charges of collaboration, spying and deceit, Diana Preston presents the human side of an unstoppable programme with a lethal outcome.

Be the first to review “Before The Fall-Out” Cancel reply 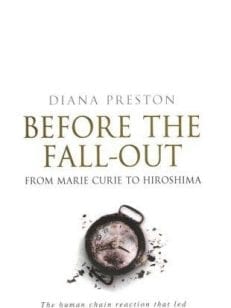 You're viewing: Before The Fall-Out €23.00
Add to cart
Create a new list