Beacon is a journalist – but not a very successful one. Eking out a living as a foreign correspondent in the Baltic states, the pattern of his life is dictated by the visits of foreign dignitaries, the whims of local officials and occasional outbursts of civil unrest. Yet despite his lack of ambition and world-weary air, journalism sometimes becomes important, even to Beacon…

‘Baltic Byline’ follows the inglorious progress of Beacon, his rivals, his brother hacks and his cat through twelve short stories, each building upon the other until… something unexpected happens.

Imagine Graham Greene’s seedy journalist Minty from ‘England Made Me’ crossed with Evelyn Waugh’s ‘Scoop’ and recast in the form of Somerset Maugham’s ‘Ashenden’ and you’re on the right track for ‘Baltic Byline’.

Be the first to review “Baltic Byline” Cancel reply 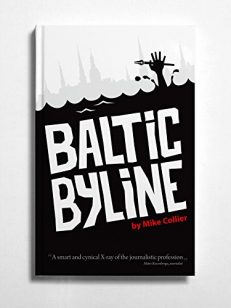