Angel Pavement is a novel by J. B. Priestley, published in 1930 after the enormous success of The Good Companions (1929).

It is a social panorama of the city of London, seen largely through the eyes of the employees of the firm Twigg & Dersingham, at No. 8, Angel Pavement. Their lives are changed after the arrival of a mysterious Mr Golspie, who assures the future of their veneer-and-inlay company through imports from the Baltic. The story has as backdrop the high levels of unemployment and economic insecurity of late 1920s London, immediately before the Great Depression.

Dedicated to C. S. Evans, Priestley’s editor at Heinemann, it was begun in October 1929 and completed in April 1930.[1] It sold nearly as well as its predecessor.

Be the first to review “Angel Pavement” Cancel reply 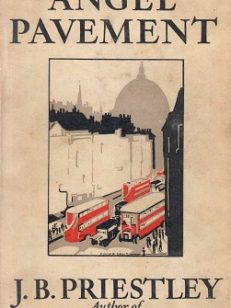