View cart “Inigo” has been added to your cart.
Larry Flynt

An Unseemly Man : My Life as a Pornographer, Pundit, and Social Outcast

Controversial and outspoken, hated and admired, the infamous Larry Flynt’s life needs no puffery or exaggeration to make it one of the most interesting life stories of our time. He is this century’s most ardent advocate of First Amendment rights, a man whose landmark Supreme Court cases are studied by every law student in America. He is the founder and publisher of Hustler magazine, a journal often described as tasteless, crude, scatological, and gynecologically explicit – to which he would reply, “Good!” For Flynt, tastelessness is “a necessary tool in challenging preconceived notions in a world where people are afraid to discuss their attitudes, prejudices, and misconceptions.”Born in the hills of Kentucky, in the poorest county in America, Flynt became a teenage runaway, an underage recruit in both the army and the navy, a bootlegger, a scam artist, a bar owner, the proprietor of a string of go-go clubs, an evangelical Christian, an atheist, and eventually a millionaire pornographer and publisher. A prodigious sexual athlete, Flynt was shot down in his prime by an assailant’s bullet and paralyzed from the waist down.Wheelchair bound and racked by years of searing pain, he became a pain-medicine junkie and habitue of America’s courtrooms. Persecuted by the self-righteous Charles Keating, prosecuted by ambitious district attorneys, sued by moral crusaders like Jerry Falwell, and hounded by the government, Flynt forged a blazing trail through the American legal system. Remarkably, Larry Flynt has never told his story before. This highly personal and reflective account will surprise everyone, offend a few, and entertain many.

Be the first to review “An Unseemly Man : My Life as a Pornographer, Pundit, and Social Outcast” Cancel reply 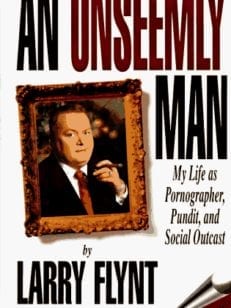 You're viewing: An Unseemly Man : My Life as a Pornographer, Pundit, and Social Outcast €8.00 Incl. VAT
Add to cart
Create a new list