Winner of the Evening Standard Drama Award as best play of 1979, and of the Plays and Players London Theatre Critics Award

‘Shaffer works out his tremendous, his colossal, theme in language of great strength… those who go to it prepared to understand what it is about will have an experience that far transcends even its considerable value as drama’ – Bernard Levis in The Times

‘A marvellously engrossing and often amusing costume-thriller, a feast for the eye and the ear’ – Steve Grant in the Observer

‘Glorious… Amadeus may be a play inspired by music and death, but it fills the theatre with that mocking, heavenly silence that is the overwhelming terror of life’ – The New York Times

‘He is dealing with the very nature of art; with immortality itself… Shaffer paints his heady subject on a wide and spectacular canvas’ – Jack Tinker in the Daily Mail

This edition includes a postscript by Peter Shaffer on the making of the film Amadeus.

Be the first to review “Amadeus” Cancel reply 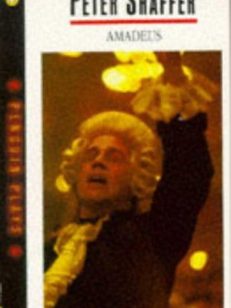 You're viewing: Amadeus €6.00
Add to cart
Create a new list