Alvin York : A New Biography of the Hero of the Argonne

Alvin C. York (1887-1964) – devout Christian, conscientious objector, and reluctant hero of World War I – is one of America’s most famous and celebrated soldiers. Known to generations through Gary Cooper’s Academy Award-winning portrayal in the 1941 film Sergeant York, York is credited with the capture of 132 German soldiers on October 8, 1918, in the Meuse-Argonne region of France – a deed for which he was awarded the Congressional Medal of Honor. At war’s end, the media glorified York’s bravery but some members of the German military and a soldier from his own unit cast aspersions on his wartime heroics. Historians continue to debate whether York has received more recognition than he deserves. A fierce disagreement about the location of the battle in the Argonne forest has further complicated the soldier’s legacy. In Alvin York, Douglas V. Mastriano sorts fact from myth in the first full-length biography of York in decades. He meticulously examines York’s youth in the hills of east Tennessee, his service in the Great War, and his return to a quiet civilian life dedicated to charity. By reviewing artifacts recovered from the battlefield using military terrain analysis, forensic study, and research in both German and American archives, Mastriano reconstructs the events of October 8 and corroborates the recorded accounts. On the eve of the WWI centennial, Alvin York promises to be a major contribution to twentieth-century military history.

Be the first to review “Alvin York : A New Biography of the Hero of the Argonne” Cancel reply 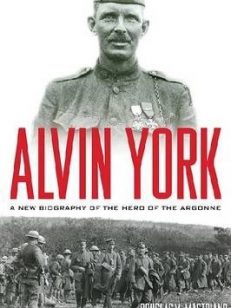 You're viewing: Alvin York : A New Biography of the Hero of the Argonne €10.00 Incl. VAT
Add to cart
Create a new list