The Action Hospital is comic.

The Action Hospital is written by Dave Baker.

Dave Baker, originally from the drug-infested wasteland that is Arizona, lives in Los Angeles. He has a degree in Visual Communications with an emphasis in Illustration. Logically, he makes a living as a writer. Dave has written comic books and ‘the’ moving pictures. Dave also enjoys talking about himself in the third person, playing air guitar, and taking long walks around his studio apartment.

The Action Hospital is drawn by Robert Negrete.

Robert is an artist living and working in Los Angeles, where he grew up. He’s got a degree in studio art, for what it’s worth. He loves comics, heavy metal and giant monsters. Occasionally, he rages on his bass.

Be the first to review “ACTION HOSPITAL” Cancel reply 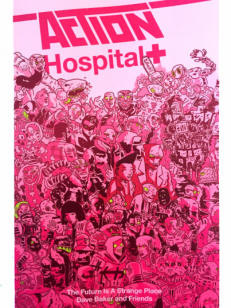