A Measure of Endurance

The remarkable, heartwarming story of a courageous teenage boy, who, after being gravely injured while using a farm machine, takes on its powerful manufacturer and wins.

Steven Sharp was a hardworking, energetic sixteen-year-old growing up happily in a tiny farming community in eastern Oregon, in a remote high desert valley. His family was his harbor. Nothing pleased him more than the outdoor life, fending for himself in the nearby mountains. In the last hour of the last day of a summer job on a local ranch, his life was changed forever when a huge baler he was inspecting suddenly and mysteriously turned itself on and severed both his arms. Slipping in and out of consciousness, stumbling through a field, he followed a fence to a nearby house. Soon he was on an airplane, hoping time was still on his side.

His recovery was amazing. Somehow he maintained his optimism and his zest for living. In the hospital, his desire to get on with his life inspired both his doctors and his fellow patients. He returned to school, joking to reassure his classmates on what could have been an awkward first day. His relaxed, down-to-earth manner put his family and neighbors at ease. Finally he was back in his beloved mountains, hunting and fishing, with the hospital’s prosthetics and his own rigged-up rifle compensating for his missing arms.

Although he was convinced that the machine that had injured him had malfunctioned, he had no intention of seeking redress—farm life had its risks and rewards. He wasn’t going to dwell on the past or let his setback change his way of life. But by an amazing quirk of fate—a friend’s memory of a notice in a three-year-old magazine—he came to learn that others had been similarly injured while using the same kind of machine. Now, with the help of a brilliant and idealistic trial lawyer named Bill Manning, whose commitment to Steven seemed something of a completion to his own spiritual journey, Steven took on the multinational, multibillion-dollar company, withstood their counterattack, and emerged triumphant.

A Measure of Endurance is a gripping, poignant, and truly unforgettable story.

Be the first to review “A Measure of Endurance” Cancel reply 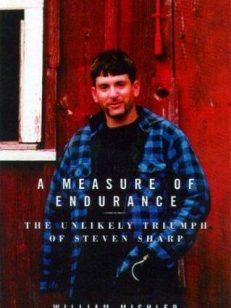 You're viewing: A Measure of Endurance €4.00
Add to cart
Create a new list