A Map of the World

One unremarkable June morning, Alice Goodwin is, as usual, trying to keep in check both her temper and her tendency to blame herself for her family’s shortcomings. When the Goodwins took over the last dairy farm in the small Midwestern town of Prairie Center, they envisioned their home a self-made paradise. But these days, as Alice is all too aware, her elder daughter Emma is prone to inexplicable fits of rage, her husband Howard distrusts her maternal competence, and Prairie Center’s tight-knit suburban community shows no signs of warming to “those hippies who think they can run a farm.”

A loner by nature, Alice is torn between a yearning for solitude coupled with a deep need to be at the center of a perfect family. On this particular day, Emma has started the morning with a violent tantrum, her little sister Claire is eating pennies, and it is Alice’s turn to watch her neighbor’s two small girls as well as her own. She absentmindedly steals a minute alone that quickly becomes ten: time enough for a devastating accident to occur. Her neighbor’s daughter Lizzy drowns in the farm’s pond, and Alice – whose own volatility and unmasked directness keep her on the outskirts of acceptance – becomes the perfect scapegoat. At the same time, a seemingly trivial incident from Alice’s past resurfaces and takes on gigantic proportions, leading the Goodwins far from Lizzy’s death into a maze of guilt and doubt culminating in a harrowing court trial and the family’s shattering downfall. 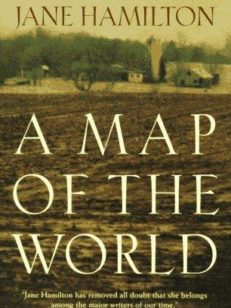 You're viewing: A Map of the World €3.00
Add to cart
Create a new list