A Century of Genocide: Utopias of Race and Nation

Why did the twentieth century witness unprecedented organized genocide? Can we learn why genocide is perpetrated by comparing different cases of genocide? Is the Holocaust unique, or does it share causes and features with other cases of state-sponsored mass murder? Can genocide be prevented?

Blending gripping narrative with trenchant analysis, Eric Weitz investigates four of the twentieth century’s major eruptions of genocide: the Soviet Union under Stalin, Nazi Germany, Cambodia under the Khmer Rouge, and the former Yugoslavia. Drawing on historical sources as well as trial records, memoirs, novels, and poems, Weitz explains the prevalence of genocide in the twentieth century–and shows how and why it became so systematic and deadly.

Weitz depicts the searing brutality of each genocide and traces its origins back to those most powerful categories of the modern world: race and nation. He demonstrates how, in each of the cases, a strong state pursuing utopia promoted a particular mix of extreme national and racial ideologies. In moments of intense crisis, these states targeted certain national and racial groups, believing that only the annihilation of these “enemies” would enable the dominant group to flourish. And in each instance, large segments of the population were enticed to join in the often ritualistic actions that destroyed their neighbors.

This book offers some of the most absorbing accounts ever written of the population purges forever associated with the names Stalin, Hitler, Pol Pot, and Milosevic. A controversial and richly textured comparison of these four modern cases, it identifies the social and political forces that produce genocide.

Be the first to review “A Century of Genocide: Utopias of Race and Nation” Cancel reply 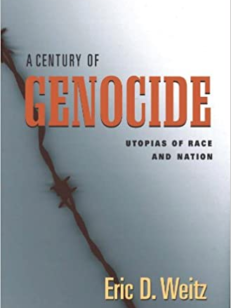 You're viewing: A Century of Genocide: Utopias of Race and Nation €10.00
Add to cart
Create a new list