Although the Royal Canadian Navy had spent the early years of the Second World War in a desperate struggle against German U-boats on the North Atlantic convoy routes, the service’s professional officers never lost sight of the need to build a balanced national navy, one that included the larger warships required for Canada to project its naval power around the globe. Part 2 of the Official Operational History continues the story of the Royal Canadian Navy begun in No Higher Purpose and carries the narrative into the decisive final years of the Second World War, as the navy largely achieves its “blue water” ambitions. Based on extensive research in Canadian, British, American and German archives, A Blue Water Navy follows the RCN’s path to victory from 1943 to 1945 as Canadian warships engage the enemy across the globe in the Atlantic, Arctic and Pacific Oceans as well as in the dangerous waters of the European littoral.

Beginning with the Allies’ North Atlantic triumph over the German submarine arm in April-May 1943, the volume examines the navy’s many roles in European waters, including the RCN’s combined operations role in the amphibious assaults on Dieppe, northwest Africa and Sicily; the procurement of large fleet destroyers and their operations guarding important Arctic and Mediterranean bound convoys; and the culmination of the RCN’s overseas buildup with Operation Neptune and the invasion of Normandy.

A Blue Water Navy recounts the multitude of tasks Canadian naval forces performed in the war’s final phases, from motor-torpedo boat, minesweeping and fleet operations to the inshore anti-submarine campaign. In tracing the acquisition of cruisers and Canadian-manned escortcarriers, this important and well-illustrated history thoroughly explores the world-wide scope of the Royal Canadian Navy’s involvement in the Second World War and its transition from a small-ship navy into a balanced force.

A Blue Water Navy was written by a team of professional historians and has been in preparation for many years. The first volume of this official history, No Higher Purpose, was highly praised by veterans of the RCN, current sailors and naval officers, and students of military and naval history. This second volume will be equally well received.

Be the first to review “A Blue Water Navy” Cancel reply 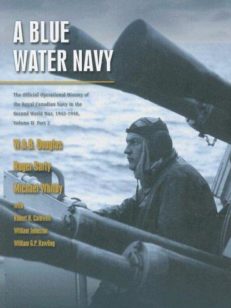 You're viewing: A Blue Water Navy €45.00
Add to cart
Create a new list