17 Carnations: The Royals, the Nazis and the Biggest Cover-Up in History

The story of the love affair between Wallis Simpson and King Edward VIII, and his abdication in order to marry the divorcée, has provoked fascination and discussion for decades. However, the full story of the couple’s links with the German aristocracy and Hitler has until now remained untold.

Meticulously researched, 17 Carnations chronicles this entanglement, starting with Hitler’s early attempts to matchmake between Edward and a German noblewoman. While the German foreign minister sent Simpson seventeen carnations daily, each one representing a night they had spent together, she and the Duke of Windsor corresponded regularly with the German elite. Known to be pro-German sympathizers, the couple became embroiled in a conspiracy to install Edward as a puppet king after the Allies were defeated. After the war, the Duke’s letters were hidden in a German castle that had fallen to American soldiers. They were then suppressed for years, as the British establishment attempted to cover up this connection between the House of Windsor and Hitler.

Drawing on FBI documents, material from the German and British Royal Archives, and the personal correspondence of Churchill, Truman, Eisenhower and the Windsors themselves, 17 Carnations reveals the whole fascinating story, throwing sharp new light on a dark chapter of history.

Be the first to review “17 Carnations: The Royals, the Nazis and the Biggest Cover-Up in History” Cancel reply 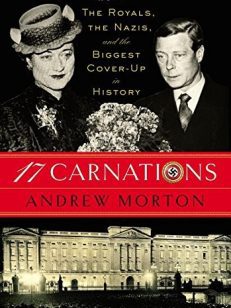 You're viewing: 17 Carnations: The Royals, the Nazis and the Biggest Cover-Up in History €10.00
Add to cart
Create a new list